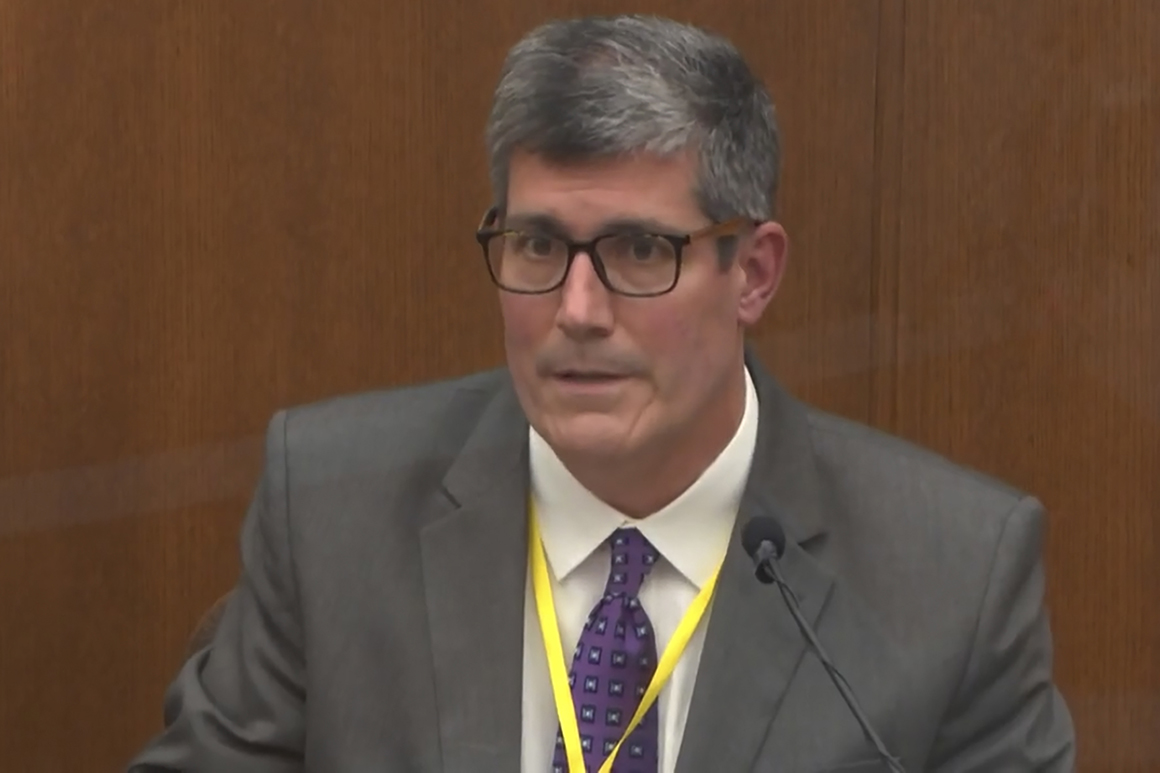 Baker said being involved in a scuffle raises adrenaline, which asks the heart to beat even faster and supply more oxygen.

“And in my opinion, the law enforcement subdual, restraint and the neck compression was just more than Mr. Floyd could take by virtue of that, those heart conditions,” the medical examiner said.

Chauvin, 45, is charged with murder and manslaughter in Floyd’s death May 25. Floyd was arrested outside a neighborhood market after being accused of trying to pass a counterfeit $20 bill.

Bystander video of Floyd crying that he couldn’t breathe as onlookers yelled at the white officer to get off him sparked protests and scattered violence around the U.S.

Chauvin attorney Eric Nelson has argued that the now-fired white officer did what he was trained to do and that Floyd’s illegal drug use and underlying health conditions, not Chauvin’s knee, killed him. And autopsy found fentanyl and methamphetamine in Floyd’s system.

Under cross-examination, Baker agreed with Nelson’s statement that Floyd’s heart disease, narrowed arteries and drug use “played a role” in Floyd’s death, though he testified that those things did not cause the death.

A medical expert who testified Thursday said a healthy person subjected to what Floyd endured would have died.

Baker testified that his examination of Floyd’s heart found no “visible or microscopic previous damage” to the heart muscle. Baker also said he noticed no injury to Floyd’s brain from either trauma or oxygen deprivation. And he said he did not notice any pills or pill fragments in Floyd’s stomach.

Baker also said he did not watch the harrowing video of the arrest before examining Floyd so that he would not be influenced by what he saw.

“I was aware that at least one video had gone viral on the internet, but I intentionally chose not to look at that until I had examined Mr. Floyd,” he said. “I did not want to bias my exam by going in with any preconceived notions that might lead me down one pathway or another.”

Other medical experts called as prosecution witnesses have likewise blamed Floyd’s death on the way he was pinned down on the ground.

Dr. Lindsey Thomas, a forensic pathologist who retired in 2017 from the Hennepin County Medical Examiner’s Office and did not work on Floyd’s case, testified earlier Friday that she agreed with Baker’s findings, but was even more explicit, saying the “primary mechanism of death” was asphyxia, or insufficient oxygen.

She said she reached that conclusion mostly from video that showed Floyd struggling to breathe.

“This is a death where both the heart and lungs stopped working. The point is, it’s due to law enforcement subdual, restraint and compression,” Thomas said.

During cross-examination, Nelson asked Thomas about what could cause a heart to suddenly stop beating, noting that Floyd’s bigger heart needed more blood and was working hard in a moment of stress and adrenaline, and that one of his arteries had a 90% blockage.

Thomas said any blockage over 70% to 75% could be used to explain death, in the absence of another cause. But she also said some people can live just fine with an artery that is fully blocked.

The defense attorney pressed Thomas by posing a hypothetical question.

“Let’s assume you found Mr. Floyd dead in his residence. No police involvement, no drugs, right?. The only thing you found would be these facts about his heart. What would you conclude to be the cause of death?” Nelson asked.

“In that very narrow set of circumstances, I would probably conclude that the cause of death was his heart disease,” Thomas replied.

In response to another hypothetical posed by Nelson, she agreed that she would certify Floyd’s death as an overdose if there were no other explanations.

But during re-questioning, prosecutor Jerry Blackwell ridiculed the defense attorney’s hypotheticals and quickly got Thomas to repeat that the cause of Floyd’s death was the restraint by police.

“Aren’t those questions a lot like asking, ’Mrs. Lincoln, if we take John Wilkes Booth out of this …” Blackwell began, before Nelson objected.

For the first time, a seat designated for Chauvin’s family was occupied Friday, by a woman. She wasn’t immediately identified. Chauvin’s marriage ended in divorce in the months after Floyd’s death.

Also on Friday, Judge Peter Cahill called in a juror and questioned her about whether she had been subject to any outside influences. She replied that she briefly saw TV coverage with the sound off and said that her mother-in-law had texted her, “Looks like it was a bad day” but that she didn’t reply.

The judge allowed her to remain on the jury.

Scotland fans celebrate draw with England in London, arrests made but…