Once assembled, the Omega blew me away from the moment I sat in it. The pseudo-leather has a very fine, low-lying grain and looks and feels very high quality. The padding is incredibly firm—the chair feels very much like the driver’s seat of an expensive sports car. There was no hint of rattle or looseness in the chair itself or its casters when rolling it out of the carport, down the sidewalk, and then carrying it into the house.

One word of warning: both of these chairs are heavy. Office chairs typically weight in at about 25-35 pounds—the Secretlab Omega weighs 66 pounds, and the Anda Fnatic we’ll cover in the next section weighs 72 pounds. Having a partner available to help lift and carry as necessary makes life a lot easier, especially if you’ve got stairs to navigate. 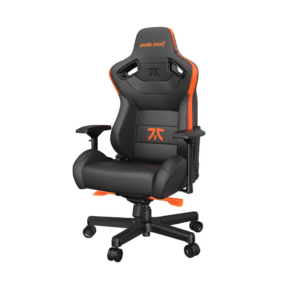 (Ars Technica may earn compensation for sales from links on this post through affiliate programs.)

Opening the box for Anda Fnatic doesn’t have the same “wow factor” that it did for Secretlab Omega. The packaging presentation is best described as “it’s all crammed in there just fine,” and there are no fancy foam blocks with custom cutouts or custom boxes for the tools provided.

However, the actual assembly process for Fnatic is much smoother and easier. The traditional assembly booklet, with only two steps per page, is much easier to follow. There are no dire warnings about pieces you mustn’t touch, all the bolts are the same size, and the included Allen wrench provides plenty of leverage to tighten them properly.

There also wasn’t a struggle to squash the seatback against the base while bolting them together; for the most part, this installation was very smooth. The only hassle I had involved the little plastic dust covers, which cover the bolts on the side of the chair. They don’t seem to actually fit the chair at all—and that’s because, technically, they don’t.

It seems as though the dust covers should snap onto the sides of the chair, then get secured with a single bolt apiece. In reality, they don’t snap on—they don’t even fit—until the bolt is tightened down fully, which deforms the soft plastic cover to lie flat against the side of the chair. Once you figure that out, the dust covers are fine—but figuring that out took a while, and I suspect more than one Fnatic owner has probably given up on the dust covers and just thrown them away.

Once assembled, the Fnatic didn’t give me the same “wow factor” that the Omega had. Its pseudo leather upholstery has a rougher, more raised grain that’s easily visible and reminded me of a basketball’s. The padding, while thick and very comfortable, isn’t as firm as that on the Omega. And there was some noticeable rattle from the casters and from the chair’s arms as I rolled it down the sidewalk to the front door.

On the plus side, the through-holes at the top of the chair give excellent mounting for the included neck pillow—and the chair’s own design makes that pillow more practical than the Omega’s does, with a more pronounced curvature to the chair back. The lumbar pillow also feels more like an integral part of the Fnatic, where the Omega’s seems like an afterthought.

As with the Secretlab Omega, this is a heavy chair—at approximately 72 pounds, it’s twice or more the weight of a typical office chair. Consider having a helper available to move it once assembled, especially if you’ll need to carry it up or down stairs.

These are both excellent chairs, although they’re quite different in look and feel. For the first week or so, I greatly preferred the Secretlab Omega, with its understated good looks, fine-grained covering, and ultra-firm padding. But after several weeks of use, the orange-and-black Fnatic grew on me—it’s now my favorite chair.

Although the Fnatic is a little loose and rattly in construction compared to the Omega, it’s significantly more comfortable—especially for long seating periods. Sitting for too long in the Omega without a break can result in red lines on your thighs if you’re wearing clothes that bunch. That’s not ever a problem in the Fnatic, which stays comfortable for hours on end—even if you forget (or refuse) to get up and take hourly breaks.

Anda Fnatic is designed for people from 5’10” to 6’10” and supports up to 330 pounds (recommended) or 440 pounds (maximum). Smaller folks may be better off with the Omega—its relatively straight back makes it more forgiving for people who aren’t tall enough to reach the top of the headrest. But people tall enough to fit it properly will appreciate the Fnatic’s deeper spinal curvature and better-integrated neck and lumbar pillows.

Researchers Surprised After They Graft Tomato Plants With Epigenetically-Modified…

The Future of Human-Robot Collaboration

Simple Software Creates Complex Wooden Joints That Interlock With No Nails, Glue, or…